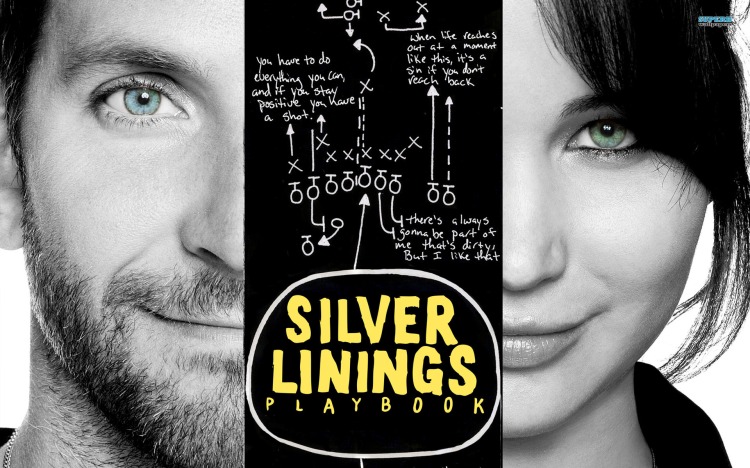 It took me a really long time to get around to seeing Silver Linings Playbook. I always want to cut the name short and call it Silver Linings, so don’t mind if I do. It’s a sick world of abbreviations out there (Tom Haverford 101.) I saw the trailer and obviously I wanted to see it in theaters: romance, Bradley Cooper, a slight indie take, Brad Coop, Jennifer Lawerence’s hair color, B.Coop. The film was right up my alley, not only I but everyone who saw it told me that. I’m a sucker for an offbeat love story, as guilty as a day-dreamer.

I actually watched Silver Linings last night without much background information except for the awesome Philadelphia references. So as you can imagine when the opening scene came on and Pat (Bradley Cooper) was in a mental institution, I was all “Awww.” The dynamic between Pat and almost every character varies. To start with, we get a taste of his airhead personality when he lies to his mother in order to make an attempt to sneak his friend with severe ADD, Danny, out of the rehabilitation center. This situation then leads into the dynamic with his opposing parents. His mother is innocent and very passive aggressive, while his father (Robert DeNiro) is simply aggressive, even physically. Later on, we meet various characters such as the a-hole town cop, neighbors (one of which is surprisingly an adult Julia Stiles,) and most importantly, Tiffany (Jennifer Lawerence.)

Throughout the beginning, I was nervous I was not going to like the movie. Tiffany bothered me. I really admire the idea of the character, but the way it was portrayed was too much and too try-hard. Her clothes were cute, though (back in black.) The background stories of Tiffany and Pat were too depressing for me. It meant a lot that they made so much progress from what life threw their way, but thinking about their situations for longer than 2 minutes, hurt.

The two loony-birds-become-love-birds scene made the entire film. I placed my hand over my mouth and listened intently to how precious Pat’s dysfunctional confession to Tiffany was. The letter must not have been more than 6 sentences long, and he even finished it out loud to her without looking at the letter! “Thank you. I love you.” I laughed, I smiled, I squeaked, I could have teared up with the proper lead up.

The film represents Philly (woot woot) through various locations and mainly with the sports world. What would Philadelphia and its inhabitants be without the Phillies, Sixers, Flyers, or the E-A-G-L-E-S EAGLES? Pat’s dad’s entire life revolves around the Eagles schedule, and all he wants is for Pat to experience the games with him. Ironically, Tiffany is a lucky charm for the Eagles, but only when she’s spending time with Pat during the games! Conflict alert! But this minor plot executes a motif of family life and tolerance.

Silver Linings Playbook promoted exactly what it wanted to promote: silver linings. Anyone who’s lost their way, whether it be through mental disability or not, can always find a path back or to a beautiful, happy place. It just happens to be 10x cuter when two people help each other find that place.

I love Paul Rudd, everything he does. He’s just too adorable to not watch everything he’s been in at least once. That’s how my brain operates, I’m sure not everyone else’s does. Wanderlust was another one of his more recent duds, but I even appreciated that, so I can respect what This Is 40 was attempting to do.

Honestly, I don’t have much to say about the actual plot of this film, except for that it was utterly depressing. Pete (Paul Rudd) and Debbie (Leslie Mann) start out in a terrible relationship, and end in a slightly, very slightly, less terrible relationship. Plain old sad. I do want to talk about the references that make up the film in more depth, though. First of all, fantastic cameos. They had Melissa McCarthy, Jason Segel, Megan Fox, Charlyne Yi, Lena Dunham, Chris O’Dowd, and the Philadelphia Flyers (my babies!) The hockey heartthrobs play the cute minor role of hitting on Debbie at the bar, attention I’d say she needed more than anything.

Throughout the film, one of Pete and Debbie’s daughters, Sadie, is watching the entire series of Lost. For those of you who do not know, Lost is the best show that has ever been on television. It was clever how they matched the teenager’s trials and tribunes, highs and lows, loving her parents and hating her parents, to the series. This was only a side concept, but if you think about, one could write a seriously killer essay on such a theory, or direct some bizarre documentary on the mind of a Lost addict. UNfortunately, they give away the ending of Lost, which is not okay with me. Yes, the show came out in 2004. Yes, it ended almost three years ago. Yes, you should have seen it or at least know what happens by now. But what if you physically live under a rock and don’t? They handled the scene the right way though, with the daughter crying and sobbing the names of every character on the show (I know that feeling well.) Finishing the last episode of a series is like experiencing a really bad breakup. Depending on how rad you’re significant other was, it very well may be worse. You don’t deserve to have it ruined by a crappy movie like This Is 40! Save yourself for Jack Shepard before you give yourself away to an almost-sequel.

This Is 40 would have had better luck if it was a straight-up sequel to Knocked Up. The tagline is “The sort-of sequel to Knocked Up.” Jason Segel’s character did reappear with some quirky lines, but not much else from Knocked Up made its way into This Is 40. If the two movies illustrated more a pattern, it might have gotten higher ratings and viewers would have been eager to revisit the mishap that was Seth Rogen. I’m not implying that a movie needs to have Seth Rogen to be funny (though I do have an orange-kinda-crush on him,) but if Judd Apatow (director) really wanted to bank in with this flick, references to Knocked Up would have been used in the screenplay.

Hey, it was a Sunday afternoon and my dad rented a copy of the movie, so I totally watched it. There’s no reason you can’t do the same, but any other time/day/hour, may not be worth it.

Recurring theme: Silver Linings Playbook and This Is 40 both displayed how easily marriages bend and break. On some real levels, LOVE THE ONE YOU’RE WITH.

Where do cows go to have fun? the moooooo-vies

View all posts by Alyssa Guckin

Blast From the Past