“Life is not a spark in space, an episode of Will & Grace, controversial yet mundane, Debra’s Messing with your brain.” – Say Anything, “Do Better” 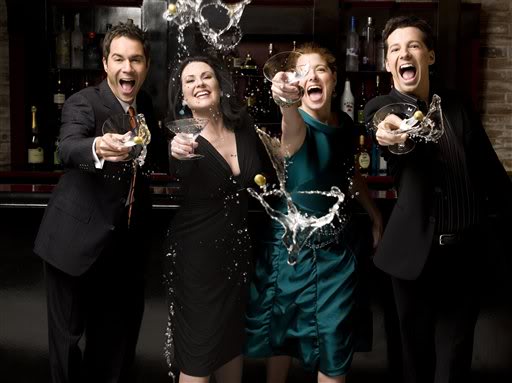 I’ve recently began watching Will & Grace from start to finish. I’m actually watching “Homo for the Holidays” as we speak (or blog), where everyone finds out that Jack (Sean Hayes) has waited 30 years to tell his mom that he’s gay (AS IF.) This is where Karen (Megan Mullally) chips in with “What is she headless?!” and the laugh track chimes in right on time.

While on my W&G endeavor, I can’t help but constantly think about the controversy that may have come with every episode release. The first season came out in 1998, and while that’s still the late 90’s, homosexuality wasn’t exactly sociably acceptable. Not to say it is now, but it’s definitely made a huge dent since then. I wonder if people specifically refused to watch it because of their views? That would put ratings down with absolutely nothing to do with the content of the show. Thank GOODNESS, society proved to be better than that because the show lasted eight whole seasons until 2006. 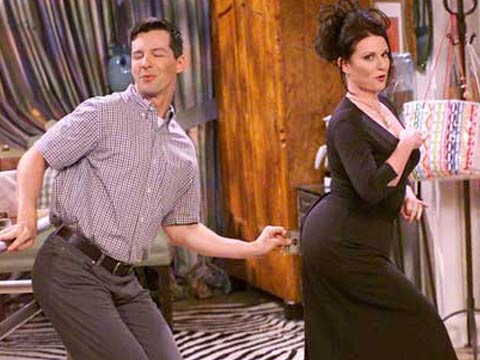 Regardless of the controversy following Will & Grace, the more ironic thing about the sitcom was how the supporting roles were favored more than the lead roles! Jack and Karen are undeniably hilarious. Jack McFarland is the overly flamboyant, fabulous, confident, absurdly crazy friend and Karen is his self-centered, fashion-obsessed, alcoholic, absurdly crazy other half. Everyone should have a Karen in their life. She’s the kinda gal you would happily hate how much you love her. Jack and Karen keep everything so fun. The most boring things would be a fantastic time with them. They go hand in hand, and it’s too easy to adore the both of them.

The entire cast has such a unique chemistry. Of course Jack and Karen have a connection, but obviously so do Will (Eric McCormack) and Grace (Debra Messing), as best friends living together. But Jack & Will also have chemistry, and Grace & Karen, and Jack & Will & Grace & Karen. Any combination works on the show. Sitcoms have the ability to last much longer when so so so many scenarios can be created between different characters, not to mention numerous minor roles.

If nothing else, I continue to find myself amazed at how well-written the show is! There’s so many gems in every episode. The most clever one-liners catch me off guard, and the writers deserve a whole lot of credit for brilliant work. Maybe not as much credit as South Park writers, but definitely up there. Will & Grace is my go-to show for when I need laugh medicine for a bad day. Make it yours, too!

Not to mention, OF COURSE Will & Grace is affiliated with the greatest network, aka the love of my life, NBC Studios.

View all posts by Alyssa Guckin

Blast From the Past